What our taxes pay for

Frustration with taxes and government spending is high these
days. Specific opinions as to where
the government is overspending are fewer and farther between. Most taxpayers
don't know what they'd like to see cut, partly because they don't know how the
spending breaks down in the first place. (Elected officials are often hesitant
to get specific as well; that's a topic for another post.)

The policy proposals offered by Third Way—a leading
center-left think tank—often disappoint with their oh-so-careful incrementalism.  But here I think they're right on: when
you pay your federal income taxes, you ought to get an itemized receipt. In a policy
brief (pdf) published last month, Third Way's David Kendall and Jim Kessler
make the case for such a service and explain how it could easily be
implemented.

Here's a sample receipt for a middle-class earner: 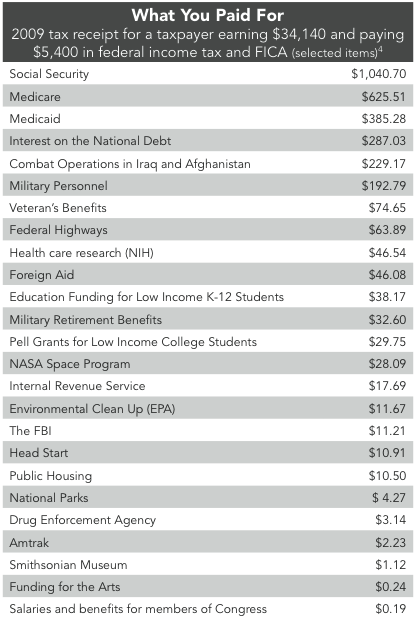 I'm a fierce (and somewhat excitable) supporter of passenger
rail, and whenever I get going on this someone inevitably points out that
highways, unlike train tracks, are paid for with fuel taxes. Of course, the
government routinely makes up for highway-funding shortfalls using the general
revenue—to the tune of 28 times more than it spends on Amtrak. In fact, this
supplemental highway spending accounts for a larger share of our federal income
tax than Amtrak, Pell Grants, the EPA, Head Start, national parks and arts
funding combined, to name just a few things for which your support may brand
you a big-government liberal.

Next time I get into one of these debates, it would be
helpful to have Third Way's sample receipt in my pocket.

While rail-vs.-highway spending happens to be a pet issue of
mine, the most obvious things the above list highlights are the spending
behemoths at the top: Social Security, health care, the military and interest
on the national debt. If nothing else, an itemized receipt would say, "So you
want to talk about reducing government spending? Talk about these things
first." Which would be a far more focused public conversation than we're having
now.

Income-tax receipts aren't a new idea; people have been
proposing this sort of thing for years. If we can put a man on the moon and
then, 40 years later, persist in spending almost three times more on the space
program than we do on housing for poor people, we ought to be able to print a
receipt that says so.

While I appreciate the effort, there are problems with the math here. It is fudged worse than the Federal budget is fudged. Now, I am no shrinking violet when it comes to military spending. But, just as an example of how poorly this is put together, the authors split the military lines out into 4 categories, making overall military expenses look much smaller than they are. Second, given the categories presented, the authors seem to have completely skipped spending on equipment. Is that folded in somewhere else? If so, say so, But the authors have to do better than this, just with their math to make me buy into what they are selling.

I align with the previous respondent but would add that I look to our nation's investment in education as a key indicator as to the direction our leaders are choosing.This only addresses funding for low income K -12 students, what about other facets of education expenditure?
Any document that fails to allow the reader to compare military vs education spending lacks credibility in my opinion.

I think highlighting overall education funding would be confusing in this context--because this is specifically about federal income taxes, which make up a small (though growing) share of public ed funding. Those specific federal initiatives that do exist tend to be focused on poor and low-income students.

That said, I agree with the general point that it's worth considering our relative spending on defense vs. education. But doing so would mean looking at state and local numbers together with federal, which is outside the scope of the Third Way authors' simple proposal: turn in your federal 1040, get an itemized receipt.

If you are going to make a point, use facts that are already available to all of us. I don't like the liberal or conservative agendas when they only use partial truths or are so unaware or misinformed then perpetuate inaccurate information. The following is factual information from our own government. Look it up if you have questions. Overall, we spend approximately 54% percent towards present and past military (NASA is included in this area as well as the human resources), 30% human resources (medicaid, medicare, social security, goes into this category), 11 % general government (medicaid, medicare, social security, is also found in this category), and 5% physical resources according to congressional budget office. The same office puts out another pie chart that separates medicare, medicaid and social security (but doesn't explain what the actual break down is which makes people think all that money is going to those specific programs). All of this can be found here “Analytical Perspectives” book of the Budget of the United States Government, Fiscal Year 2009.
Last comment: according to http://old.armscontrolcenter.org/archives/002279.php the USA spent 47% of the world's total military spending, $515 billion, compared to the next 15 countries combined (some of the countries included in the list are Russia, Saudi Arabia, & China). N. Korea, Iran, and Iraq didn't even make into the top 15 countries.

If I had just spent $5,400 in a store and left with a receipt for $3,193.42, I would believe the store was trying to pull a fast one on me. Other commentaries may reflect similar feelings. The Christian Century could help us all by presenting all categories of federal, state and local government spending that adds up to what was actually spent. The purpose is to inform, not to argue for or against a particular political position or expenditure.

But if you spent $5k at one store and $500 at another, you wouldn't expect the first store to give you a receipt for both. Sure, it would be great to have a spending breakdown for every state and municipality in the country, but tracking down and presenting all this data is a bit outside the scope of the work of a national publication w/ a small staff. Federal income taxes are a discrete subject, paid separately from state and local taxes and to a separate entity. I don't agree that it's misleading or unhelpful to talk about them without talking about everything else at the same time.

Steve, You're right. Let's just look at Federal taxes and Federal expenses. My first point was that the Federal Income tax and FICA (Social Security and Medicare) cost $5,400 but the expenses you listed were only 60% of the $5,400. Where is the rest going?

Ah, that does make more sense--sorry, I misunderstood your point. The list above isn't something I generated; it's an image taken directly from the Third Way report. As it says, it lists only "selected items." It includes the biggest items and after that is an incomplete list--and yes, the latter could be chosen to make a particular point, though at a minimum it's done to create a more manageable graphic.

Third Way published something similar back in 2008, which includes a more complete list:

A tax receipt at last?

How high are our taxes?

Among those of us who maintain that not everything the federal government does should be either privatized or eliminated, it's common to point out that income tax rates are a lot lower than they used to be, especially but not only for the rich.
by Steve Thorngate
January 20, 2012

Where our money goes: An itemized tax receipt

If we can put a man on the moon and then, 40 years later, persist in spending far more on spacecraft than on passenger trains, we ought to be able to distribute an income-tax receipt that says so.
by Steve Thorngate
December 9, 2010

We are the Tumblrs

It's great to see David Beckmann convince Mark Bittman to join the fast against attempts to cut federal programs that help the poor and the hungry. Bittman's dismissal of the religious element of the effort by Bread for the World and others--"I doubt God will intervene here"--betrays his unfamiliarity with Christian thought. (I'm tempted to send him one of my ELCA "God's work, our hands" fridge magnets.) But thanks to Bittman's involvement, now even the Nation is giving the progressive evangelical effort positive coverage.
by Steve Thorngate
March 31, 2011