Inequality isn't just about the 1 percent

The signature issue of Bernie Sanders’s presidential campaign is economic inequality. He talks about it constantly. It’s at the top of the list on his site’s “issues” page; items two through five are really about inequality, too.

He does this in the language you’d expect of a national candidate of the left, post-Occupy Wall Street: broadly populist language addressing the 1 percent and their large slice of the income pie, and the .1 percent and their even larger slice of the (even tastier) wealth pie. Bernie’s stats and graphs leave people offended by the new Gilded Age we’ve entered—and they place 99 percent of voters on the side of the offended rather than the offending.

Framing inequality in this way puts the wild success of the superrich in sharp relief. But it also lets the regular rich off the hook.

Richard Reeves recently highlighted something Bernie generally does not: it’s not just the 1 percent but the 20 percent whose income growth has pulled away from the pack. Here’s his graph: 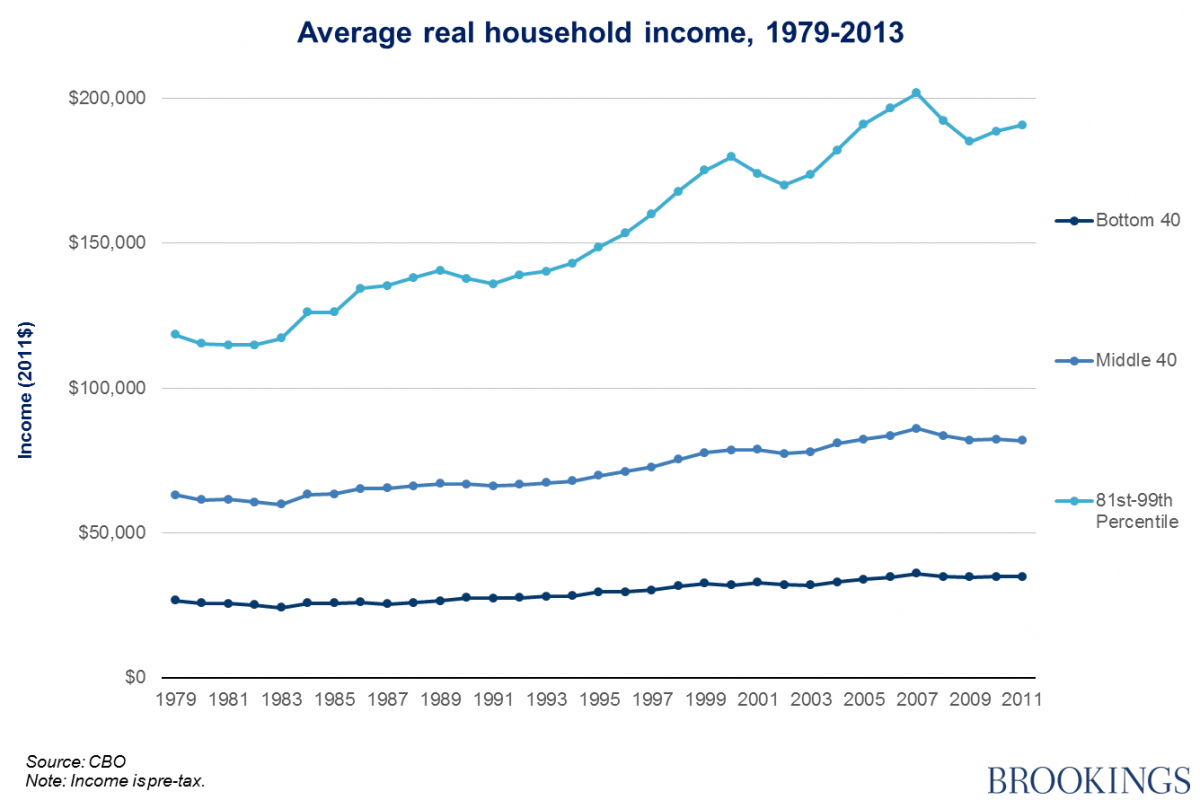 Note that the lightest blue line at the top excludes the top 1 percent—it represents the 81st–99th percentile of earners, un-inflated by millionaire money. Superrich aside, the 20 percent are living in a much better economy than everyone else is.

Reeves calls this group the “upper middle class,” though he acknowledges the slipperiness of such terminology. Elsewhere, he identifies the issue of even the 1 percent feeling like they’re not rich, not really, because the .1 percent are rising even faster. He focuses on the problem of people believing in higher taxes for the rich, by which they tend to mean other people. I’d add the ecological and spiritual problem of endless aspiration, of striving for a target that keeps moving out of reach.

Oh, and I’d call the 20 percent rich, not upper middle class. They have more than enough money, and rising inequality has been good to them—and language around class matters. I’m repeating myself; see this or this or this.

It’s hard to blame Bernie for railing against rarefied wealth, or even for trying to mobilize the 99 percent. But inequality is more complicated than just the superrich vs. everyone else. And different issues of inequality—the obscene wealth of the top 1 percent, the limited gains of the bottom 80, the poverty that persists farther down the scale—call for different policy solutions.

Three Questions for you, Steve.

1. Is a pie a good analogy for the economy? (Does the size and "tastiness" of my piece limit yours?)

2. Is there an inherent immorality in being more wealthy than someone else, or does that depend on degree or on how you got there? http://www.jewishworldreview.com/1015/prager102015.php3

1. Sometimes, and sometimes. Any simple analogy works better in some situations than others. Sometimes the pie can get bigger (or smaller) rather than just being sliced differently. Other times not. In any case, the question of how prosperity is shared is relevant whether or not the overall amount to be shared can also be changed.

2. I'm a lot less interested in the individual morality of being wealthy than I am in the collective morality of a society that tolerates massive inequality.

3a. That kind of mobility is a lot less normal now than it was then.

3b. I do think that a lack of ambition to be wealthy represents a strong moral compass. I believe that endless aspiration is deeply harmful to American economic and moral culture.

1. Never seen a pie get bigger. It is relevant in either case, but the solutions are not the same.

2. What do you mean by massive? Is our society more moral than those whose inequality is even more massive?

More on the middle class and framing

I posted recently about how the rhetorical category “the middle class” seems to keep growing (even as the actual middle class is shrinking). Then I read Jon Ronson’s article in this month’s GQ. Ronson profiles six people—actually, five individuals and one family—who represent different spots on the U.S. income scale, giving a glimpse of “how to live on $____ a week.” It’s a solid premise, and Ronson approaches his subjects with empathy and a dose of righteous indignation. But I was startled by his methodology.
by Steve Thorngate
July 19, 2012

Defining the middle: The rhetoric and reality of class

What does "middle class" mean if it somehow applies to most of the country? And if we are all middle class now, what are the implications?
by Steve Thorngate
October 16, 2012

How the rich got richer

Jacob Hacker and Paul Pierson tell a story that is at once familiar and unfamiliar. The familiar part is that inequality has grown dramatically in the U.S. What’s less familiar is how this came about.
by Anthony B. Robinson February 23, 2011

The most-read In the World posts

We are all middle class now

Obama's tax proposal is good short-term policy and smart politics. But it irks me every time I hear him define the middle class so expansively.
by Steve Thorngate
July 10, 2012