A primetime TV character thumps the Book of Common Prayer

I’ve become a loyal viewer of the ABC drama Nashville. The story sort of comes and goes—here it’s a subtly observed relationship drama, there it’s an off-the-rails primetime soap—but it’s perhaps the first TV musical with consistently great music direction, and some of the performers are pretty good, too. So I wait the silly story lines out and keep watching.

Last week’s episode followed young country star Juliette Barnes through the aftermath of her confrontation with a conservative Christian protester. He saltily disapproved of her relationship with a married man; she retorted that “there is no God—[unlikely pause]—who would something something something”; the internets people clipped it after “God”; God-fearing country fans went ballistic.

But Juliette does believe in God, guys! So in last week’s episode, she goes to church to pray. Specifically, it appears, to an Episcopal church—note the pew copies of The Hymnal 1982 and Lift Every Voice and Sing: 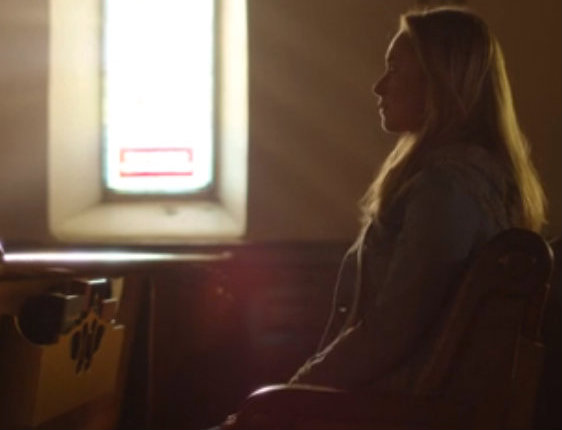 Maybe this arc is headed toward a crudely pro-progressive-faith thing, like that movie Saved: Juliette is insulted and hurt by a Bible thumper, so she goes and finds acceptance at a nice liberal church. Except that I’m as sure as I can be that the Bible thumper is in fact thumping the 1979 Book of Common Prayer: 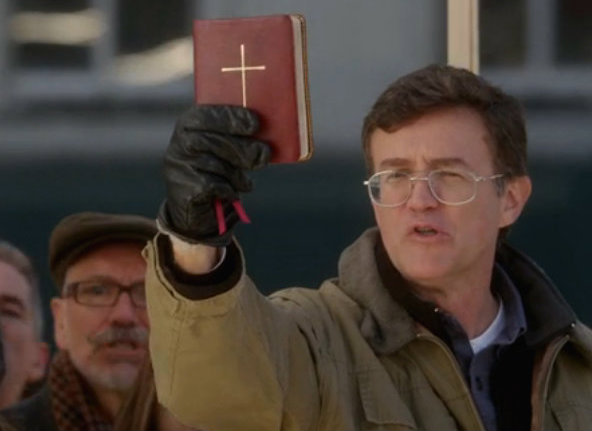 So, hmm. I know a lot of Episcopalians—my wife, my Century colleague Amy Frykholm, a bunch of other people—and while their political and cultural views vary, none of them is real big on going out to protest celebrities for their libertine lifestyles. I don’t even think there’s a designated prayer for that in the BCP’s Collects: Various Occasions section. (Though it would have been epic TV if the protester had crafted his taunt in collect form.)

When I mentioned this on Facebook, Century contributor Ben Dueholm pointed out that the guy might have been protesting not Juliette’s homewreckage but rather a (far) subtler subplot about an improper application of the Episcopal rubrics for worship. Good point—another main character is named Deacon; perhaps in an upcoming episode he’ll become an actual deacon and yet be scandalously denied the right to serve as Gospeller at a Eucharistic service.

Or maybe it’s just another lazy effort to signify “religious nut.” Hey, that book’s got a big gold cross on the cover! Use that one. Oh well—most viewers just thought it was a Bible, anyway. And we all know that everyone with a Bible is just like that protester guy...

High anxiety: The terror of the dark unknown

Anxiety has a way of turning otherwise faithful Christians into foxhole atheists. I'm too busy worrying to pray.
by Katherine Willis Pershey
March 2, 2012

The Oxford Guide to the Book of Common Prayer

Living between the Bible’s first and last prayers

Most days I hover somewhere between Adam’s “I was afraid” and John of Patmos’s “Come, Lord Jesus.”
by Timothy Jones
June 30, 2021