A playground bully, her victim, and their God

An incident in Germany reminded me who we all belong to.
by Kyle Rader
November 8, 2019
Getty Images

It was a minor incident, but it stayed with me. We were in Germany to visit relatives, and one day as we ex­plored the town of Annaberg in Saxony, my sons and their cousins found a playground and started playing with the other children there.

Kyle Rader is a theologian and a pastoral associate at the Church of the Transfiguration in New York City.

At some point, one of my sons climbed onto a rocking play animal. The girl who had been on the toy earlier now returned, climbed on it, and pushed him off. He began to wail. The girl’s father came over to ask her what happened. We overheard her saying, “Er gehört nicht zu uns.” “He doesn’t belong to us.” The father responded that they needed to leave in a few minutes.

A playground incident involving a child who is still learning to share is hardly noteworthy. My son wasn’t traumatized, and I try not to be judgmental of other parents’ choices. But this father’s decision not to challenge his daughter’s statement has stayed with me, mainly because of the way it resonated with so many other events in the world.

I couldn’t help being aware that we were in a region where there’s strong support for the right-wing populist party, which believes that Europe’s problems are not Germany’s problems, and for which the plight of asylum seekers hardly registers as a problem. And in my own country, I knew, children are stuck in cramped cages without access to legal aid, education, or basic hygiene and members of Congress from nonwhite or immigrant backgrounds are told by the president and others to go home. Sie gehören nicht zu uns.

The incident in the playground was still on my mind that evening when we went to St. Anne’s Church for a concert. The church in Annaberg is a Late Gothic gem, built just before the Reformation. The aesthetic conservatism of the Re­formers and an ad­mirable restoration effort in the late years of the German Democratic Republic has preserved much of the late medieval and early modern artwork. The church is most known for its “stone Bible,” a series of painted carvings depicting biblical stories from creation to final judgment. 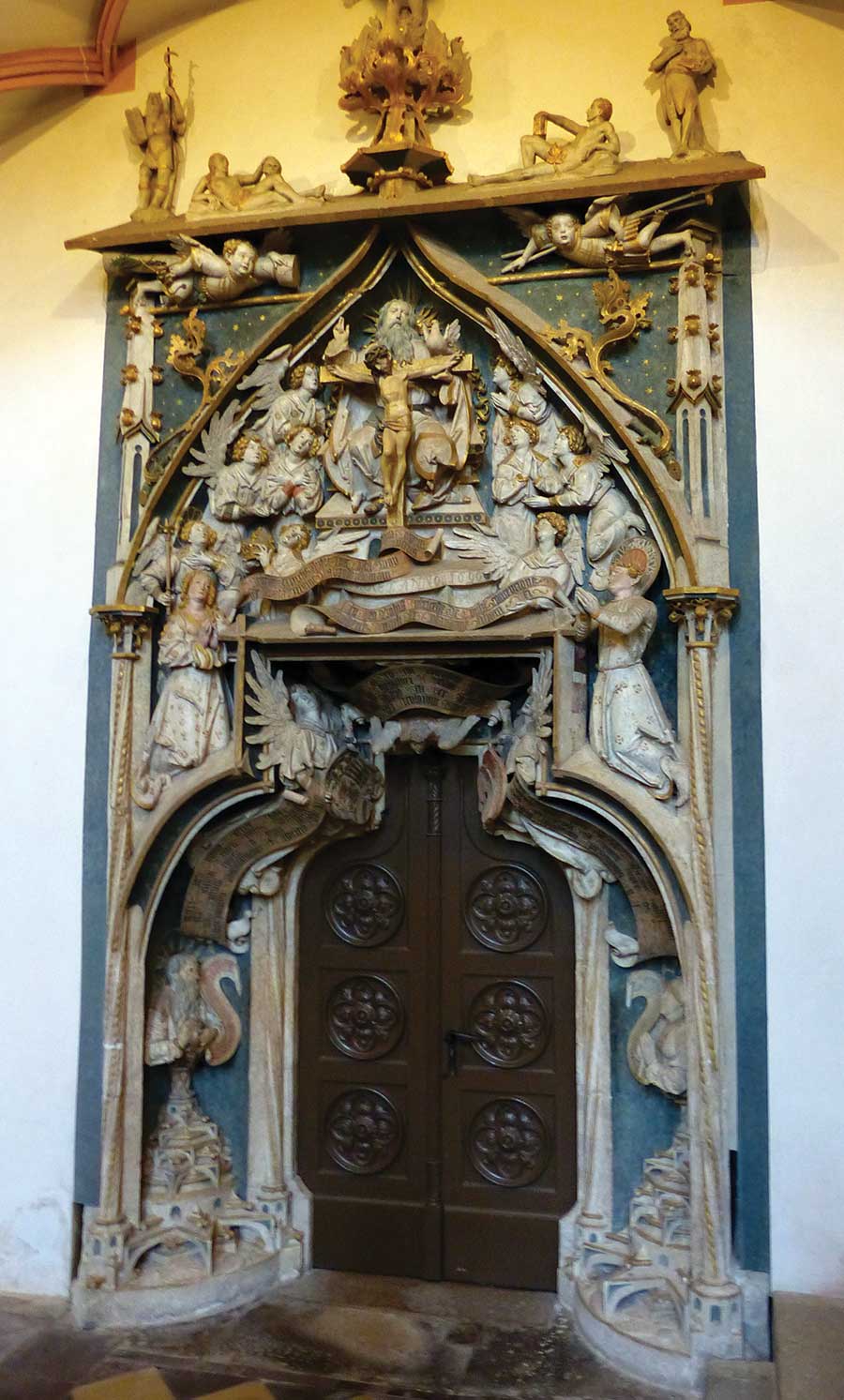 What most struck me, however, was Die schöne Tür, a carved and painted doorway that includes a depiction of the crucifixion. Behind the crucified Christ is a figure representing God the Father, who is shown as a bearded man making a gesture of blessing with his right hand. It looks like God the Father is embracing the suffering Jesus with his whole body, while the Holy Spirit hovers above in bird form.

The wisest Christian artists over the centuries have usually declined to depict God the Father, and most theologians agree with that judgment. The First Person of the Trinity is the one who re­mains invisible and incomprehensible, dwelling in a darkness that is also an un­approachable light.

Further, it’s not necessary to depict the Father if you’ve already done so by depicting the Son. “Anyone who has seen me has seen the Father” (John 14:9). I also get nervous about an overemphasis on the crucifixion in theological and artistic discussions of the Trinity.

But this image works better in Die schöne Tür than in most visual representations of the Trinity: you can see the Father only by looking at Jesus, and you see the fullness of God embracing in Christ the fullness of suffering humanity. God has already done this in the incarnation, but here we see it in its extreme. God the Son experiences suffering and death as God the Father wraps his arms around the whole thing, saying, “Nothing could be more unlike me than this, yet this belongs to me.”

What is the this? It’s everything that God the Word accepted and made forever part of himself in the incarnation: the whole created world and humanity in all its brokenness. It’s even the most extreme moment of human suffering that Jesus experienced when he called out in agony, “Why have you forsaken me?” This too is accepted and claimed by God. Es gehört zu mir.

The church in Annaberg was consecrated to the mother of Mary—the mother of a girl who could have hardly imagined a stranger intrusion into her life than the incarnate God in her womb. Yet she said, “Let it be unto me according to your word.” Es gehört zu mir.

And then there’s Joseph, who was willing to compromise a royal bloodline by saying that a child who was no biological relation to him whatsoever belonged to him. Er gehört zu mir.

The presence of a church housing such an image does not stop the evils of the world. St. Anne’s Church rose from the silver mines of early capitalism and posed no great impediment to the terrors of Nazis or neo-Nazis, nor to trivial playground bullying. Yet looking at Die schöne Tür that evening, I found myself consoled and less afraid of the future. Maybe even a bit hopeful.

“The earth is the Lord’s and the fullness thereof” (Ps. 24:1). That the earth belongs to God, and that we all belong to God and thus to each other, is a reality more real than the stupidity of children or the cruelty of adults. God’s promise is that the fullness of the reality depicted on that church door will become more and more visible: Wir gehören zu Gott.

A version of this article appears in the print edition under the title “Who belongs?” The photo of the Schöne Tür (1512) in St. Anne's Church (St. Annenkirche Annaberg-Buchholz) is used with permission.

Living by the Word

When we read scripture backward
by Greg Carey
May 19, 2020

Biblical friendship in an age of loneliness

Facebook tells me I have 633 friends. Sirach tells me how few of those are faithful friends.
by Kendra Weddle
January 22, 2019

Civic housekeeping: Jean Elshtain on mothering and other duties