by Paul-Gordon Chandler
April 15, 2011
Anglican Church of Christ the King, Tripoli. Below: The church hosts a monthly luncheon attended by the ministers of the local churches. Courtesy of Episcopal Diocese of Egypt.

With the sound of NATO bombs in the background, the priest of the Anglican Church of Christ the King in Tripoli, Hamdy Daoud, explained that most Christians have fled the city in search of safety, but that he and other ministers had remained. "Even though the majority of our community has evacuated, I am still here to serve those who are not able to leave or who have chosen to remain. It is important that we retain a Christian presence here at this critical time," he said. None of the church buildings in Tripoli and Benghazi had suffered any damage, he reported.

Prior to the outbreak of violence, more Christians resided in the Libyan cities of Tripoli and Benghazi than in the other countries of the Maghreb, the western region of North Africa that includes Morocco, Western Sahara, Algeria, Tunisia, Libya and Mauritania. While Libya does not have the illustrious Christian heritage of Tunisia and Algeria, the home of church fathers such as Tertullian, Cyprian and Augustine, Libya has had a significant role in recent Christian history of the region, serving a significant Christian population.

Libya can claim the very first North African follower of Christ, Simon of Cyrene. ( What was once Cyrene is now the town of Shahhat, in northeastern Libya, not far east of Benghazi.) According to the Gospel accounts, Simon was forced by the Roman authorities to assist Jesus by carrying his cross to the place of crucifixion. A follower of the Jewish faith, Simon probably came to Jerusalem for the annual Passover festival. While little is known about Simon, the book of Acts says that individuals from "those parts of Libya belonging to Cyrene" were present at Pentecost—offering a glimpse of how the Christian faith could have spread to Libya.

Paul-Gordon Chandler was rector at St. John's Church/Maadi in Cairo and is the author of Pilgrims of Christ on the Muslim Road: Exploring a New Path Between Two Faiths.

The churches in Muslim Libya exist to serve the expatriates who live in the country. The Christian residents are Europeans, West Africans, Filipinos, Egyptians and South Asians. Caritas International estimates that 1.5 million sub-Saharan immigrants were living in Libya before the recent conflict. The Egyptian community is also large—over 1 million before the fighting started. 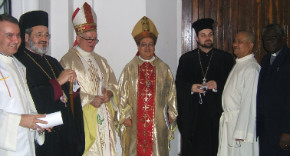 The Anglican Church of Christ the King lost its original Garrison Church when Muammar Qaddafi took power 40 years ago. It now meets in what was once an unused Catholic church—given to the Anglicans by Qaddafi's government. Prior to the current conflict, Christ the King averaged over 200 worshipers each weekend at its English and Arabic services. Now only 34 congregants re­main, mostly Nigerians, with a few Pakistanis and Egyptians.

The evangelical Union Church of Tripoli, led by a Ghanaian pastor, previously had well over 1,000 in attendance at its services, which met in four languages (English, Eritrean, Arabic, French). Now there are just under 200 left in the community. The numbers at the Greek Orthodox Church have dropped from 50 to 7. According to some estimates, in recent weeks up to 800,000 Egyptians have returned to Egypt, greatly lowering the numbers at the Coptic Orthodox Church in Tripoli.

The Roman Catholic Church in Libya is led by an Italian bishop who grew up in Libya. With more than 80,000 congregants, the Catholics account for a little over half of the total number of Chris­tians in Libya. Most of the Cath­olics are African, Filipino, Maltese, Italian and French. The church offers masses in over a dozen languages.

Catholics are free to worship in churches in Tripoli and Benghazi. Most other church properties were seized by the government when Qaddafi came to power. The Roman Catholic cathedral of Tripoli was made into a mosque in 1970, and the cathedral in Benghazi was closed.

The Catholic Church's 16 priests and 65 religious sisters (from 15 religious orders) offer social services to the immigrant population. Many of the nuns are working in hospitals and health centers, including in the eastern coastal region, where they are treating those wounded in conflict. Sisters of the Missionaries of Charity, the order founded by Mother Teresa, work in various social centers in Tripoli.

In Benghazi, unlike in Tripoli, where each denominational church has its own property, the different church communities all hold worship services at different times in the Roman Catholic building.

"There is a certain normality in Tripoli during the day, but no one goes out at night in concern for safety," said Hamdy, who is from Egypt. "Some feel uncomfortable coming outside their homes, especially in the evenings. We do all our errands and shopping during the day and are all home by 6 p.m. And the only Westerners left, it seems, are the few journalists that are here." His church and other churches have switched service times so the services can conclude before sundown.

In the midst of tensions, a remarkable church unity exists. Hamdy said that the Anglican church hosts a monthly ecumenical lunch, attended by the ministers of all the local churches. "There is a special spirit of oneness at this time," he said. Hamdy sees "tremendous potential" for the churches when the fighting ends. For now, "We keep on keeping on, with our eyes on the Author and Perfecter of our faith."

A blogger at the Committee for Accuracy in Middle East Reporting in America points out that some lines of Paul-Gordon Chandler's article on events in Egypt are unusually close to lines in a February 19 article in the New York Times—and charges that Chandler lifted them from the Times.
by David Heim
March 9, 2011

New today from the Century: Carolyne Call on how the church fails the divorced, Sarah Barringer Gordon on the other side of religious liberty and same-sex marriage, more.
By %1
July 10, 2013

Libyan Christian clergy vow to stay on amid violence

One of the chief ramifications of the protests that overthrew Egyptian president Hosni Mubarak was the way religious divisions were set aside in the process.
by Paul-Gordon Chandler
March 4, 2011

Amen: A Prayer for the World, featuring the work of Christina Saj (left) and Hisham El Zeiny (right)