In the ancient city of Laodicea in western Turkey, site of the church reprimanded in the book of Revelation for being “neither cold nor hot,” our guide led us across the old agora to a pile of broken columns. One had a fascinating marking. A menorah had been scratched onto the stone, and next to it was inscribed a cross. What did this mean?

The guide gave it the most benign interpretation: here was an example of Jews and Christians living together, he said, perhaps sharing a building.

It’s more likely, however, that the markings were signs of religious conflict. Perhaps Christians in the fourth century had taken over a synagogue—which might have been erected on a pagan temple. The deep circle carved at the base of the cross suggests that it was meant as an act of replacement, displaying the church’s triumph over the synagogue.

Like other ancient ruins, the stones of Turkey display the successive rise and fall of peoples and civilizations—Hellenic, Roman, Jewish, Christian, Muslim (and that’s just some of the more recent history). What’s striking about Turkey for a Christian is seeing the church on the defeated side as well as on the triumphant side. When the Muslims took power in the 1400s, they turned churches into mosques. Often this involved little more than plastering over the Christian images, inserting an alcove pointing to Mecca, and erecting a minaret outside. 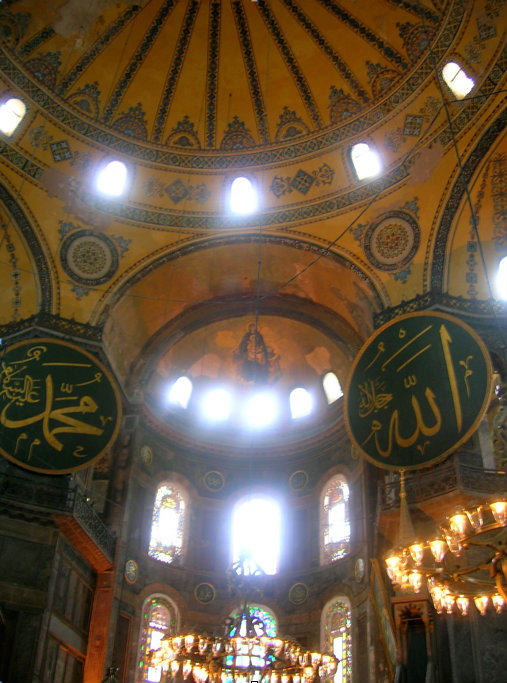 The prime example of this renovation is the great Hagia Sophia in Istanbul, built in the sixth century as the cathedral of the Byzantine Christian empire and turned into a mosque after the 15th century.Now a museum, Hagia Sophia features Christian frescoes and mosaics (recovered from behind the plaster) as well as dramatic shields with the names of Mohammed and his sons in Arabic writing, which were part of the building’s life as a mosque.

In the struggle to control sacred space, it could be said that the art historians and the tourist industry have now triumphed. Their regime may be banal, but it’s inclusive in its way—it admits anyone who can buy a ticket.

The struggle over the space is not over. The current ruling party in Turkey has made noises about turning Hagia Sophia back into a mosque. Politically, this would represent a disturbing move. Yet one can understand the desire to see Hagia Sophia become again a space for worship.

I’ve read that at various times separate lower rooms in the vast building have been used for Muslim or Christian prayer. Could Christians and Muslims ever share this space with each other and with visitors? Could it be made a place of worship where the many layers of the past are recognized and not erased?

Notes from the Global Church

“You are here to kneel,” wrote Eliot, “where prayer has been valid.” But which prayers are valid at the Mezquita Catedral, or at Hagia Sophia?
by Philip Jenkins
March 8, 2012